Economies are reliant on the efficacy and stability of banks to effect commerce, to borrow, lend and save. While bank collapses are relatively rare, the memory of the financial crisis of 2008 and the financial collapse of several lenders including Northern Rock and Lehman Brothers remains recent and cautionary. The crisis that caused these banks to collapse were seismic shocks to the financial system not dissimilar to the economic short circuits caused by the COVID-19 pandemic lockdowns. Should we be concerned now?

Since the outbreak of COVID-19 The Bank of England has maintained that the UK banks remain well capitalised and are able to withstand the difficulties of the crisis; however it is always prudent to be vigilant with your assets. Interest rates are so low that there is little upside risk to leaving your money in the bank, and current share prices and market valuations suggest the downside risk is increasing.

With a second national lockdown, the UK’s retail banks will not be unaffected. Mass redundancies loom, corporate and mortgage defaults are likely to follow, and this will have a knock-on effect on bank assets, bad debt and revenue generation. In addition, UK banks are exposed to other Eurozone banks, some of which are coming under pressure amid COVID measures. Even with the deposit protection of £85,000, some of our clients are starting to express concern about holding assets in the banking system.

How have banks fared in COVID?

In the weeks before the UK went into full lockdown, shares were beginning to react to the growing global crisis, and the top five UK banks have all lost between a third and a half of their market value since the middle of February. This was already starting from a low base because all the banks lost substantial value during the global financial crisis, falling between 50 and 97 per cent at the time. The graph below shows the share prices of the UK’s big five banks from the end of 2006 and until May 2020. 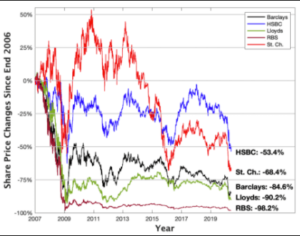 According to a report published by the think tank the Institute for Economic Affairs, the dramatic drops in share price are not just a concern about future profitability but are a symptom of a deeper malaise in the banking system. The paper’s authors believe these falls are relevant because a bank’s market capitalisation is equal to its share price times the number of shares it has issued. This impacts on capital ratios and leverage and goes to a bank’s ability to withstand a crisis.

The second table below gives banks’ capital ratios (given by market cap/total assets) and associated leverage (the extent to which the bank funds itself with borrowings measured by total assets/market cap).

How Strong are British Banks?

The report, titled How Strong are British Banks, says that since 2006, the banks’ average capital ratios have fallen from 11.2 per cent to 2.3 per cent this year – or a fall of 80 per cent. “The implication is that a loss of £139 billion, or just 2.3 per cent of their assets would be enough to wipe out the capital of the banking system”, the report said.

To add fuel to the fire, the banks’ average leverage (borrowings) has increased almost fourfold from 8.9 in 2006 to 44.3 in May 2020. Banks were widely regarded as being excessively leveraged going into the 2008 crisis and as a rule of thumb, anything above 10 is considered unsafe, according to the report.

Banking on a bailout?

If a bank failure did occur, the scale of any government bailout would be hindered by the growing debt being taken on to keep the COVID-19 economy afloat, retain jobs and save businesses.

The Bank of England believes UK banks are well capitalised and can weather an economic storm, but it also recently questioned banks over their readiness or ability to process negative interest rates. This implies that the BoE may consider negative interest rates as an arrow in their arsenal as the economy struggles to recover from the COVID pandemic.

While so far, the questions have been technical, relating to banks’ IT systems and processes, there will certainly be ramifications for profitability if interest rates go below zero. Negative interest rates hit bank earnings by squeezing the gap between the money they make on loans and what they pay to savers.

The British Banking Industry in 2020

The banking industry has changed immeasurably over the last few decades, with branch closures a regular feature of restructurings as the banks look to reduce their overheads. In the first half of 2020, there were more branch closures than in all of 2019, and TSB recently announced the closure of 164 branches.

If there is a run on the banks in the manner of Northern Rock, online bank accounts will likely be suspended and there will be fewer physical outlets to go to. As online banking becomes more ubiquitous and post-COVID cash is disappearing, money is becoming less and less tangible and the prospect of counter-party risk is increasing.

The financial crisis tarnished the banks’ reputations, and more recent fines for LIBOR fixing, market manipulation and mis-sold PPI haven’t helped to polish their image or their balance sheets. The COVID crisis has put pressure on individuals and businesses, and this has curtailed lending opportunities, while redundancies and foreclosures on assets are all risks for a bank’s bottom line.

The looming possibility of negative interest rates, the precarious financial position of the UK banks from a market capitalisation perspective, and the increasing pressure on every part of the UK economy as another national lockdown comes into force are all reasons to carefully consider where you put your assets. Low interest rates negate any upside risk to leaving money in the bank and there is plenty of downside risk. The argument for gold, which circumvents the banking system, becomes more compelling as the risk temperature rises.

1 ROYAL EXCHANGE
LONDON
EC3V 3DG
02070606902
The Pure Gold Company’s (TPGC) website and investor guide offer information only about investing and saving with a precious metals influence. TPGC do not offer any personal or financial advice. TPGC do not offer any opportunity to participate in options, derivatives, futures or any security. Instead TPGC can only assist in physical metal (gold / silver - coins and bars) for delivery or storage. As such If you’re unsure of the suitability of an investment based on your circumstances please seek independent advice. Users should understand the market rate for gold / silver can go down as well as up. It is your responsibility that you seek your own independent advice if you think you need it. For more information on please read our terms and conditions and our privacy policy.
BUY GOLD /
BUY SILVER
CALL US NOW
02070606902
Privacy Settings
1 ROYAL EXCHANGE
LONDON
EC3V 3DG
T 02081380591

Set Up Your Gold Silver Accumulator

We will e-mail you an investor guide to explain:

4) Our Buy Back Guarantee

RECEIVE OUR LATEST RESEARCH, UPDATES AND REPORTS IN REAL TIME

We aim to respond to any questions you have within 3 working hours. If your enquiry is urgent or you would like to make a purchase call us on 020 7060 6902